When you are much closer to touching a plate than you are to its edges, it is approximately an infinite plate.  Suppose the plate has a charge density

, what is the electric field that you experience?

For a plate that is truly infinite, with no granularities, every point looks the same.  Since the plate goes on forever in two directions, there’s no means of measuring your distance to the plate.  It would make sense if the electric field was constant throughout the space that we are considering.

Suppose we want to know the electric field a distance

away from a plate of charge density

.  We could try an integral over all of the plate, but we could be even smarter about it.

, measured from the point directly beneath the point where we want to find the electric field.  For a ring of width

away from the projected point, the electric field will come in at an angle

.  So, the perpendicular contribution

What will the E-field from an infinitesimal disc be then?  The area of the disc

.  The distance from our point to the ring is

, so the complete expression for the E-field contribution from an infinitesimal disc is

If we integrate from

we will cover the entire plane of charge. 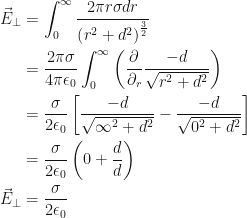 Magnetism exerts a force on particles proportional to their charge.  The total force on a particle of charge

from an electromagnetic field

So supposing you look at a current

direction, with a magnetic field

in the y direction.  Since no charges are piling up just yet,

.  So, the force on a free particle of charge

as positive, but there’s no need for it to be anything other than zero.  Let’s look at the positive and negative cases separately, and see what kind of behavior we find.

is also positive.  Since we’re assuming that

is positive (and we will get the opposite result if it is pointing in the opposite direction), we can conclude that a force

will push the particle in the

is positive, the velocity of the particles is in the opposite direction as current, making the velocity coefficient

negative.  Since the charge is also negative, a force

direction will also push a negative charge towards the

No matter what sign charge we use, charges will pile up on the

wall of the conductor.  There, they will act like a plate with surface charge density, which we will denote with

.  Since the overall material is electrically neutral, there will be a corresponding pileup of not-electrons on the other side of the conductor, corresponding to a surface charge density

.  We know that the electric field from one such plate is

, so from two plates we expect a total electric field of magnitude

should be zero, so we would expect

, however.  If we know the density of charged particles

, and we know the current

, then we can find the velocity of each particle,

The potential across the plates can then be calculated.

Conservation is one of the basic assumptions of physics.  The basic assumption is that for any kind of “stuff,” the amount of stuff going into any region is equal to the increase in stuff in that region. Using the formalism of vector calculus there is a clear way of stating this conservation law for the specific case of charge.

be a charge density function, dependant on position

represents the rate of change of charge density with respect to time. Using the standard basis vectors

represent the rate of change in the respective directions.

The basic statement of the Continuity Equation makes a statement about any region.  It says that the sum of all of the partial derivatives is zero, or:

If we call time

, then we can write this a simpler way:

Now, let’s look at the laws of nature that Maxwell learned in his physics classes.

The first one was that the partial derivatives of the electric field coming out of a region is proportional to the charge density.

Using our new, compact notation where latin indices represent summing over all the spatial variables (1 to 3), we can express this as:

Other authors often use the notation